Is Soil a Renewable Resource? 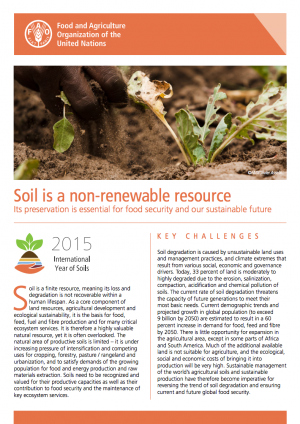 Soil is a complex living system that is composed of three categories. Soil is renewable depending on the nutrient and carbon balance. In a natural ecosystem, soil is a renewable resource when its use is offset by the amount of nutrient and carbon it releases. The following article will discuss the three categories of soil and how they relate to soil replenishment. In addition, we will look at soil management and how to manage it sustainably.

Relative renewability of soil is the process by which the rate of soil formation exceeds its degradation. Soil replenishes itself, but not to its original level, until the next major climatic shift. When this window of regrowth does not occur, soil is considered non-renewable. Soil, however, is not renewable if it is eroded and bedrock is exposed.

The rate at which soil replenishes itself is largely determined by the rate of human use. Soil replenishment takes millions of years, and human activities use soil faster than its natural renewal rate. Unfortunately, soils are lost at a rate of 20 billion tons per year because we misuse land and do not restore them properly. Therefore, if we want to protect soil as a renewable resource, we must reduce its human use.

Soil contains large amounts of carbon. Plants take carbon from the air and store it in the soil. In cold climates, soils store large quantities of carbon. Without soil, this carbon would quickly return to the atmosphere as CO2, a major contributor to climate change. In the long run, sequestering carbon in soil is a great renewable resource. It also helps stabilize carbon levels in the atmosphere.

Soil sequestration can be achieved through organic amendments. In long-term experiments, organic manures increase the rate of SOC sequestration compared to chemical fertilizers. For example, Christensen and Korschens (1996) found that the increase in SOC concentration over 100 years was almost 10%. In contrast, Jenkinson and Korschens (1990) found that the increase was almost one hundred-fold, and Witter et al., 1993, found a 44% increase in SOC concentration after three years of no-till farming.

The use of crop rotation and diverse crops adds more biomass to the soil, which may resist decomposition. Other practices, such as minimal tillage, help protect soil carbon. Other ways to store carbon are through rotational grazing, which involves moving cows to new pastures after grazing them in the old pastures, allowing them to regenerate. Additionally, incorporating manure into the soil will help spread carbon into the soil.

Soil is the most important carbon sink for humans and is capable of storing 25 percent of the world's carbon emissions. In moist regions, soil stores the most carbon in the form of peat and permafrost. In hot and dry regions, soils do not store as much carbon. Soil carbon also contributes to the global warming problem. A well-maintained forest can store more than a hundred times more carbon than soil.

The process of sequestration in soil is a long-term process. Plants take advantage of this system by converting dissolved carbon into stable carbon. As they grow, these carbon compounds are eventually recycled back to the soil, increasing the soil's carbon stock. However, if we don't protect soil carbon, it will be lost and we won't see the benefits until our planet is in dire straits.

Soil carbon has a significant role in climate change. Much of the attention surrounding global warming has focused on the need to limit emissions of fossil fuels. Soil carbon plays a major role in storing CO2, but soil sequestration must be part of the global warming strategy. Soil carbon sequestration should also be undertaken as part of land restoration projects. Moreover, we must avoid deforestation and farming of peatlands, since peatlands are major sources of carbon and are destroyed by cultivation.

The biological carbon cycle is a process that involves the absorption, conversion, and release of carbon by living organisms. Every year, billions of tons of carbon dioxide are absorbed and released in roughly equal amounts. Soil organic matter contains three times more carbon than the vegetation it covers. Agricultural practices such as no-till farming and reduced tillage can help revitalize soil carbon stocks. The U.S. Forest Service can provide useful data and tools to enhance soil carbon sequestration.

Soil is a vital and undervalued component of the land. It supports an entire ecosystem ranging from the smallest bacteria in the soil to the largest trees. This ecosystem contains more life forms than the population of Earth. When managed properly, it can replenish the earth's carbon, supply plants with nutrients, control pests, and help the environment. However, current land use practices in Europe are not sustainable.

Soil is an important resource with intricate connections to environmental sustainability and human health. Biogeochemical cascades that connect the two are largely invisible to humans, but influence ecosystems and human health. As such, soil is a complex resource, and changes in the properties and processes of soil are slow to manifest. Understanding changes in the health and sustainability of soil is crucial for food security and global sustainable development goals.

Soil is an essential component of the Earth's critical zone, and provides important services for human and animal life. The degradation of soil is an ongoing problem that threatens basic human needs. Thus, the need to protect soil is more critical than ever. By 2030, the United Nations has set targets to meet the SDGs. By then, soil may be a limited renewable resource, and we must protect it.

Soil is a complex entity made of mineral particles, organic matter, and air. This ecosystem is a crucial part of the agricultural process, and farmers who are committed to the sustainability of their practices will prioritize soil care over all other activities. A healthy soil promotes healthy crops and livestock. In addition, soil organic matter is crucial as a source of nutrients and functions as a substrate for microbial activity. Soil organic matter also buffers the impact of climate change on agricultural production and ecosystem services.

As the soil science community works to advance the understanding of soil, policy makers and practitioners can benefit from this research. They must also work together to develop and disseminate appropriate indicators. These indicators must be practical for small farmers and other stakeholders. This way, the results of soil research will be applied toward achieving the SDGs. Sustainability assessments of soil should also consider the influence of human behavior in a complex human-nature system.

The best way to improve soil fertility is to protect its structure and apply agricultural and processing techniques. Ideally, these practices will provide healthy, sustainable, and economically profitable production conditions. For example, minimal tillage is necessary to prevent weeds, while no-till methods reduce the use of chemical and herbicides. By managing soil, you will increase the soil's capacity to hold water, infiltration, and availability of nutrients.