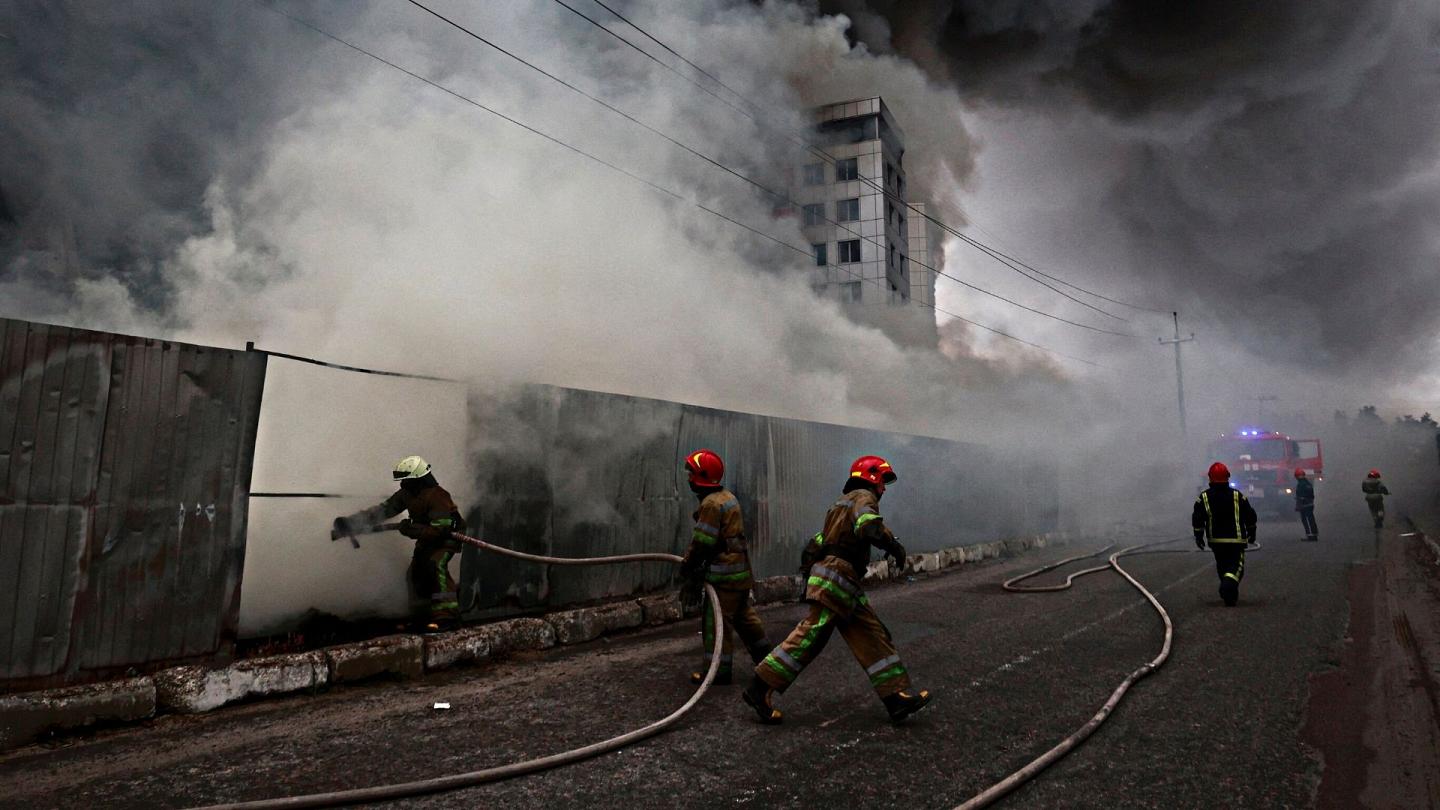 A Russian delegation denies its government has any responsibility for the fire at a Ukrainian nuclear power plant. They say Ukrainian forces attacked Russian forces outside the plant and set a training building on fire. The IAEA says the radiation levels in the area are normal, but Ukraine has accused Russia of waging nuclear terror. The Russian ambassador, Vasily Nebenzya, denies any government involvement. He also says that Ukraine should create "safe zones" around nuclear power plants.

A massive explosion at Russia's biggest nuclear power plant has raised fears of a meltdown, and the world is on edge. The explosion could be as destructive as six Chernobyls, the nuclear power plant that exploded in the Ukraine in 1986. Prime Minister Boris Johnson has called for an emergency U.N. Security Council meeting to discuss the situation, and he has also criticised Russian President Vladimir Putin for his "reckless actions." But the President of Russia has not issued an apology for his "offensive" actions.

In an attempt to cut off Ukraine from the sea, Russian forces have seized Europe's largest nuclear power station on fire. While the fire is suspected to have been started by a Russian projectile, the International Atomic Energy Agency (IAEA) chief Rafael Grossi said he has no control over potential radiation risks associated with the plant's operation. Ukraine says the incident did not alter radiation levels in the city.

A massive nuclear power plant in Ukraine has been attacked by Russian forces. Shelling has damaged the building and caused fire in a training facility. The incident has led to widespread fears of a possible radiation leak and nuclear damage. However, international monitors said that no radiation leaks were reported. The Ukrainian emergency services agency said the fire was contained to the perimeter of the complex and the facility was still functioning safely as of 6 a.m.

The Russian army has been stationed outside of Kyiv for several days. A large Russian armoured column has been seen on television and radio, with explosions heard in the city centre. Meanwhile, Russia has seized Europe's largest nuclear power plant on fire, and has subsequently deployed its troops to protect it. The IAEA has spoken to the Ukrainian prime minister and the nuclear regulator.

Ukraine's State Agency of Management of the Exclusion Zone lost control of its monitoring system, but the last reading showed that radiation levels were seven times higher than normal. Radiation levels at the Chernobyl site reached 9.46 microsieverts per hour, but were still well within their operating range and did not pose a threat to the general public. Nevertheless, the IAEA has been concerned about data interruptions.

In Ukraine, the government has urged Russia to end military activities in the area and allow international inspectors to inspect the nuclear facilities. Despite these concerns, Ukraine has won an exemption from expanded U.S. sanctions against Russia and tightened export restrictions to the country. The IAEA says radiation levels are normal following a nuclear power plant fire. However, the government's response has failed to address concerns over a possible fallout from the fire.

The IAEA is concerned about Ukraine's response to the situation. Ukraine has been under Russian occupation since February 24, and Russian troops have seized the nuclear power plant in Kyiv. The plant employs about 210 Ukrainians. Firefighters cannot enter the building due to gunfire and are unable to reach the reactor. The IAEA says it is working with Ukraine's government to replace the Zaporizhzhya plant.

Two plant employees were sharing the compound with Russian troops, and they observed that they were not wearing any radiation protection gear. Only about a week later, Russian radiation specialists arrived at the site. They were not wearing protective gear either. One of the plant employees told CNN that the town's water and heating were likely to be out of work in a few hours. However, the risk is still too high, despite the recent setback.

Ukraine's six reactor complex has been the focus of a recent conflict with Russia. While the situation has not yet been fully resolved, the IAEA has been in touch with officials from Russia, which has accused the state-owned company of terrorizing local residents. The IAEA has recommended that countries around nuclear power plants set up "safe zones" to protect the surrounding community. Whether or not such zones will help prevent an accident is still unknown.

The head of Ukraine's state-owned enterprise, "Energoatom," has voiced concerns about the situation, and urged invading troops to allow workers to continue working. The IAEA has warned that even if there are no plans to destroy the nuclear power plants in Ukraine, radioactive clouds could be carried over the country by warplanes. And while the risk of deliberate shelling by Russian forces is small, the repercussions of nuclear disasters would have far-reaching consequences.

A recent incident in Ukraine has led to a massive and unprecedented nuclear threat. The country's four nuclear plants produce half of the nation's electricity. While each unit is designed to have a 950 Megawatt electric capacity, they together generate a total of 5.7 Gigawatts of electric power. While the Russian military has threatened to bomb the plant, Ukraine's government has agreed to set up humanitarian corridors and a ceasefire around these corridors. Civilians may be able to evacuate along these routes. And this could even help protect civilians from the conflict.

As the fighting in eastern Ukraine escalates, the Ukrainian president is accusing Moscow of waging a "war of annihilation." The war has killed more than 1,300 Ukrainian soldiers, but the government has not said exactly how many are Russian. As of Monday, Russia has not claimed a single major military victory. It has shelled civilian targets more frequently than military ones. The Ukrainian military, on the other hand, has defended itself and is urging the international community to stand up and condemn the Russian forces for the bloodshed in its annexation of Crimea.

The fire at Europe's largest nuclear power plant has been extinguished, but the seized facility is still under Russian occupation. Zelensky accuses Russia of waging nuclear terror and attempting to recreate the Chernobyl disaster. The emergency services in the area initially raised alarm after Russian troops blocked access. However, the Russian military later allowed access to rescuers. Despite the dangers, the Ukrainian government is trying to contain the situation.

In addition, the Ukrainian government has been working to protect its citizens from further Russian aggression. The European Union has been concerned about the nuclear risks associated with the war in eastern Ukraine. Former commander of the Chemical, Biological, and Nuclear Defense Forces, Hamish de Bretton-Gordon, has said that European bunkers have decayed and were no longer in use. Even countries closer to Russia are beginning to consider nuclear risks.

In the midst of the conflict, Russia has accused the Ukrainian government of using unconventional means to invade the country. The invasion began on February 24, with Russian forces destroying civilian infrastructure and displacing 2.5 million people. In one city alone, Mariupol, which was seized by Russian forces, is experiencing one of the worst humanitarian catastrophes on earth. Hundreds of thousands of civilians have escaped the city in the past week.

The U.S. Nuclear Regulatory Commission, which oversees nuclear power plants, has not been very strict on fire protection regulations. Instead, it has granted hundreds of exemptions, and the NRC has given no force to licensees to implement long-term changes. As a result, plants have opted to install compensatory measures to mitigate the damage caused by fire. However, there is no clear standard for what constitutes a safe fire barrier.

In order to ensure that no fire can reach the reactor core, U.S. nuclear power plants have implemented a risk-informed fire protection program. Since the 2010 approval, 25 other plants have implemented NFPA 805-based programs, with three more plants awaiting review and application to this standard. The Reactor Oversight Process (ROP) is the NRC's process for overseeing the fire protection practices of nuclear power plants. Fire safety is monitored by trained personnel and by NRC inspections. In 2011, U.S. reactors reported six major fires. For every 10 reactors that operated, this is a very low number.

The NRC also has mandated that U.S. nuclear plants have multiple sets of emergency shutdown equipment in case of fire. Fire protection equipment includes multiple sets of automatic sprinkler systems in key areas of the plant. Firefighting is also facilitated through alternative control stations and emergency power sources. Ultimately, a fire prevention strategy should be the key to ensuring that nuclear power plants remain safe. In addition to separating control cables, NRC regulations require that nuclear facilities have a comprehensive fire safety plan.

The NRC expects licensees to implement the necessary changes to the facilities within a reasonable amount of time. However, they must also take into account the impact of any issues on public safety. For example, the fire barrier issues associated with the Hemyc barrier required significant time. The NRC needed time to study its capabilities before approving the solution. Furthermore, the other defenses at the plant were deemed sufficient and adequate.