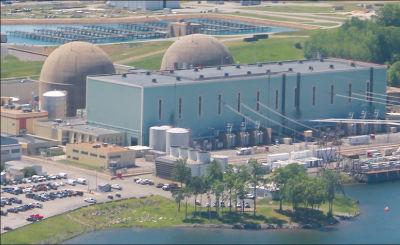 The U.S. Nuclear Regulatory Commission (NRC) has approved Virginia Electric and Power Company's application to increase the capacity of its North Anna Power Station Units 1 and 2 by up to 1.6%. NRC staff analyzed the plant's design and performance evaluations to determine whether the proposed increase would be safe. The quake that shut down the plant also was considered, and the company's response to it.

The third public meeting with the NRC at North Anna Nuclear Power Plant shows that Dominion placed an emphasis on safety and reliability, and that the units were ready for restart. The company conducted extensive safety verifications during the restart process and worked closely with NRC officials and other stakeholders. The company provided daily updates and a daily news service and magazine, and representatives from various departments made presentations to civic organizations.

The company is still weighing the options for the third reactor at the North Anna nuclear power plant. The company is using other power sources and buying power to compensate for the plant's offline time. The company has not committed to adding a third reactor, but it has indicated that it will evaluate the option after it receives operating approval from the NRC. The company's safety record will be closely monitored as it continues to evaluate its options.

The company's restart at the North Anna Nuclear Power Plant is expected to take 10 days. The restart will take place in phases, allowing for safety equipment to be tested. During this time, additional personnel will be hired to monitor the reactors. The company plans to restart Unit 1 first, gradually increasing the water temperature to 580 degrees Fahrenheit and boosting pressure to 2,250 pounds per square inch. During a six-day period, the company plans to restart Unit 2. By the time it reaches 100 percent, both reactors will be back in operation.

Dominion Energy has filed an application with the Nuclear Regulatory Commission for a license extension at the North Anna Nuclear Power Plant in Louisa County, Va., where it operates two 973-MWe Westinghouse pressurized water reactors. If approved, this would allow the company to continue to produce safe electricity from the plant until the year 2060. The company is currently reviewing the application.

Dominion's plans to extend the life of the Louisa reactors

Dominion Power has proposed extending the life of two of its reactors at the North Anna nuclear power plant. The company hopes to increase the output of both reactors by spending $4 billion on upgrades. Louisa reactors were originally licensed for 40 years. In 2003, the Nuclear Regulatory Commission renewed their licenses for 20 years. The latest renewal request would extend those licenses for a further 20 years, bringing the total operational life to 80 years.

Dominion has been facing a backlash from residents who object to its plans to add a third reactor at North Anna nuclear power plant. Residents and environmental groups are concerned about the cost of the proposed construction. Meanwhile, Dominion must apply for a permit from Virginia regulators to build the new reactors. The company is also facing opposition from the local community and anti-nuclear activists.

The state's Atomic Safety and Licensing Board will address the hearing request filed last month and Dominion's subsequent license renewal application. Dominion's applications were docked in October, after a lawsuit was filed by environmentalists against the utility. Dominion's plans are supported by a recent settlement agreement between the utility and SCANA Corporation, the company that acquired SCANA in January.

Residents who live in the shadow of Plant Vogtle should contact the Blue Ridge Environmental Defense League and ask them to intervene in the licensing process. The Atomic Safety and Licensing Board must address public safety and environmental concerns before approving the expansion. The lawsuit filed by the People's Alliance for Clean Energy and the NRC Staff is seeking a temporary stay on the license application until Dominion can resolve its legal challenges.

The quake that shut down the plant

A magnitude 6.0 earthquake struck near the North Anna nuclear power plant near Boone, North Carolina, on August 25. The nuclear power plant immediately entered an Unusual Event status and canceled its scheduled maintenance, citing the quake. As a result, the plant lost grid power and used diesel generators to keep the plant operating. Meanwhile, plant personnel continued to check on the condition of the plant. As of Monday afternoon, NRC staff in Maryland's headquarters were aware of the earthquake and immediately began to call other U.S. nuclear power plants to check on their status. The agency has also made contact with the North Anna nuclear plant and coordinated its response with other federal agencies.

The NRC has tasked a special team to evaluate the effects of the earthquake on North Anna. The commission will evaluate the plant's seismic performance to determine whether it was adequately prepared for an earthquake of this size. After the North Anna nuclear plant was shut down, Dominion engineers checked every pipe, valve, and connection in the feed-water structure. This structure would provide cooling water if the reactor shut down.

Located 18 km from the epicenter of the quake, the North Anna nuclear power station suffered no damage. Unlike its sister plant, the plant is now the only commercial nuclear power station in the U.S. to experience an automatic shutdown. The reactors shut down automatically and safety systems worked as intended to keep them safe. In the meantime, the U.S. Nuclear Regulatory Commission (NRC) sends an Augmented Inspection Team to the site to assess the damage caused by the earthquake and decide on a plan to deal with it.

The company's response to the quake

According to the NRC, the quake did not damage the nuclear power station, which was constructed with multiple layers of safety. Its seismic monitoring was far greater than the maximum licensed level, and it did not cause any functional damage. It is unclear how the company was able to avoid the incident, but it's important to note that the company's initial assessment of the quake's impact on North Anna was based on engineering studies, which concluded that the plant would be safe even if the quake caused a minuscule one-foot-high earthquake.

The NRC staff evaluated Dominion's post-quake inspections and the actions required to restart the plant. The NRC concluded in November that both units could be restarted without harm to the surrounding areas. The NRC issued a letter to Dominion, enforcing several conditions for restart, including additional safety assessments. This letter imposed additional obligations on the company, including the implementation of a restart readiness inspection and a comprehensive inspection of all systems and equipment.

In addition to assessing the quake's effects on the surrounding area, the NRC also reviewed the 27 nuclear plants east of the Rockies, highlighting potential seismic hazards and calculating the maximum amount of ground-shaking a reactor can withstand. In addition to the NRC report, 12 other nuclear plants in the region declared their reactors to be "unusual events," a lower level of emergency. After the North Anna quake, the company's response included an extensive public communications program.

The company's response to a falsified inspection report

Federal officials say a U.S. nuclear power company's inspector, Gregory Croon, falsified an inspection report to cover up his own errors. Croon worked at the North Anna Nuclear Power Station for four years, leading the company's safety efforts. As the senior inspector of the facility, he was responsible for safety inspections across the entire plant.

In an NRC-endorsed document, the Electric Power Research Institute (EPRI) assessed the impact of a quake on the entire station. While the actual impact on the plant was one, detailed inspections of its safety systems showed that it would have a zero impact. The company responded by making more extensive engineering inspections and conducting more testing and analysis to assess the potential impact.

Dominion's response to the falsified inspection report at North Anna nuclear power plant has been a positive one. The company was proactive in working with state and local officials, including Virginia Gov. Robert F. McDonnell, and House Majority Leader Eric Cantor of Virginia's Seventh Congressional District. The company has since updated its licensing basis, added a "free-field" seismic instrument that is not affected by buildings, and installed an uninterruptible power supply.

In the wake of the scandal, FENOC submitted five letters to the NRC claiming that its past inspections were adequate. In February or March 2002, FENOC shut down the Davis-Besse nuclear power plant. The company's engineers, including Geisen, Siemaszko, and Cook, prepared false responses to the NRC. They also concealed material information from the NRC.