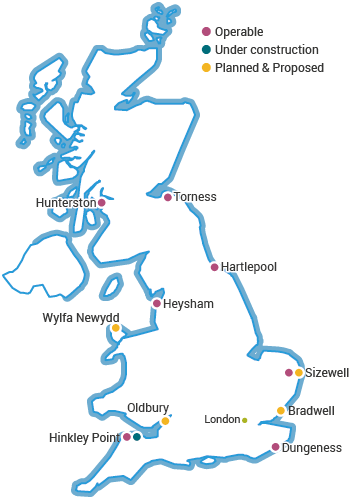 The United Kingdom has several nuclear power stations. Some are more dangerous than others. The newest one, Hinkley Point, is one of the most controversial in the world. The draft Nuclear NPS has some controversial features, which is why I wanted to create a map. In this article, I'll show you where each nuclear power station is located, the companies involved, and the Alternatives to disposal of spent fuel at Sellafield.

The Office for Nuclear Regulation (ONR) has granted a site licence to a company looking to build a new nuclear power station in Somerset. The licence, however, is not a formal go-ahead for the construction of nuclear-safety related plant. The move marks a significant step toward the building of a new generation of nuclear power plants. The NNB GenCo project is a major milestone for the company.

ONR, the UK's nuclear regulator, grants licenses to companies that build and operate nuclear power stations. The licence covers the entire lifecycle of a nuclear reactor and is composed of 36 specific conditions. These conditions must be met by the licensee, who must prove they are a legal entity, as well as meet their regulatory obligations. The ONR expects the industry to adhere to the terms of their licence, and it is up to them to make sure the facility will operate safely.

The UK currently generates 15% of its electricity from nuclear capacity, but most of the existing plant capacity is due to be retired over the next decade. However, the UK government plans to build up to 24 GW of new nuclear capacity by 2050. In order to make these plans a reality, the government has instituted a rigorous assessment process for new reactor designs. In addition, the UK has liberalised the electricity market and privatised the power industry, making major capital investments difficult.

The UK government has passed the Nuclear Safeguards Act 2018 to make government regulations more effective and to address the gaps caused by leaving the European Union. In December 2018, the UK signed a safeguards agreement with the IAEA to ensure continued access to nuclear materials for electricity generation and medical use. The agreement will take effect from 1 January 2021. It is unclear when the new sites will open. This is a time to watch this situation carefully and make sure that it is not disrupted.

The UK government announced in 2008 that it would develop new nuclear reactors by 2030 to meet the country's electricity demand. The government deemed eight sites suitable for the new generation of reactors. Some of these sites already had some nuclear reactors in place. But plans for all but three have been put on hold, and the companies planning to build them have yet to make final investment decisions. Hinkley Point is currently under construction, while Sizewell and Bradwell are likely to copy the Hinkley design.

Two companies previously owned Hinkley Point, Iberdrola and GDF Suez. Scottish & Southern Energy purchased Hinkley Point in November 2011. In January 2018, they announced the closing of the project, and the company had already spent PS150 million preparing for the closure. In April 2017, another consortium, called Sizewell C, was announced. The final three stations will be closed in 2022. These plans are likely to face a similar fate.

China viewed the UK nuclear deal as a great opportunity to export its nuclear expertise. China has made it clear that it intends to be a global leader in nuclear power, and it saw it as a way to market itself as an important world power and a valuable political ally. In 2012, CGN started showing interest in the UK nuclear sites. In December 2014, they bid for the Wylfa nuclear plant in Northumberland, and were later confirmed by Parliament.

The UK is looking to build at least seven new nuclear power stations by 2050, and many people think that these are the only ways to keep power prices under control. The recent surge in power prices, caused by a combination of factors including a shortage of wind energy and an outage of an electrical cable from France, has heightened fears about Britain's lack of spare generation capacity. China General Nuclear, the company behind the Hinkley Point plant and the Sizewell nuclear power station, has expressed an interest in building a plant outside of London.

The company currently owns a 33.5% stake in Hinkley Point C and a 66.5 percent stake in the Bradwell nuclear plant in Essex. The two companies have been working together on several nuclear projects in the UK for more than a decade, but the government's recent political turmoil has stalled crucial documentation for both the Hinkley Point and Sizewell nuclear power stations. Although the UK government previously preferred private funding for nuclear projects, there has been widespread opposition.

The UK currently produces approximately 15% of its electricity from nuclear capacity, but with the shutdown of many of its power stations, the UK may not have enough electricity to sustain its economy in the future. It's important to have a diverse mix of energy sources, and nuclear is one of the most reliable, low-carbon solutions. There are many other renewable sources of electricity, but the UK currently relies on nuclear power for a third of its electricity generation.

The British government has also announced plans to build a new nuclear power station in Wales, which would add to the existing Hinkley Point and Sizewell plants. Ultimately, these plants would generate enough electricity to power six million homes, but they won't be operational until the mid-2030s. The British government is in the process of selecting sites. They have identified a number of sites, but have not made final investment decisions yet.

Alternatives for disposal of spent fuel at Sellafield

A plan to transport and store spent fuel from the Magnox reprocessing plant at Sellafield, one of the two worst polluting plants at Sellafield, is under consideration. The Swedish authorities have so far kept the plan secret, but the Bellona Foundation has just recently informed the Norwegian government of the proposed transport. However, the Norwegian Minister of Environment is extremely opposed to the transport. He is demanding a national solution that meets all environmental, health and safety standards.

Sweden has a different solution. Instead of sending the spent fuel to Norway, the company plans to reprocess it there. The reactor was used to produce weapons-grade plutonium, but now produces thousands of tonnes of spent fuel. The area is the largest employer in the country, and Sellafield has a profound impact on the region's economy, social and cultural life. A Swedish company has proposed that the spent fuel be reprocessed at Sellafield.

The reprocessing process was initially developed for military purposes, but is now widely available for industrial use. The Magnox operating programme is a process that reprocesses spent fuel from nuclear power plants. The reprocessing of spent fuel is a more environmentally friendly approach than disposal, as the process involves little or no waste and has regulatory backing. The Magnox reprocessing plant has been at Sellafield for 50 years, and is scheduled to close by 2021.

Another solution is to store the spent fuel in interim storage until it is ready for disposal. Interim storage would reduce the length of storage time and would be used until half of the fuel is discharged. As the fuel cools, it would be loaded into storage containers. Eventually, the earliest discharged fuel would be discharged first. In this way, the fuel would be stored until the final disposal container is constructed.

Construction of a new nuclear power station in the UK has been delayed by a number of years. A new facility is planned for the Isle of Anglesey in Wales. The company EDF says that the Hinkley Point C plant will save households PS1bn per year in energy bills. The company has made its plans clear after comments by the business secretary Kwasi Kwarteng. He has warned that the cost of the new station may push up the price of energy bills.

The UK government plans to introduce new legislation allowing nuclear power plants to be funded by consumers, and the government expects to give the go-ahead for the long-delayed Sizewell C nuclear power plant in northeast London. The cost of the project is estimated at PS20 billion ($27.5 billion), so it is not clear how the costs of this project will be split. However, the government believes that the government's new funding scheme will attract private investment and make it possible for it to reach its target of building a new nuclear power station every year.

The government recently invited public nominations for a nuclear power station in the UK, and 11 sites were identified as potentially suitable. Although Dungeness was not included in the shortlist, several other sites were considered suitable. These include Druridge Bay in Northumberland, Kingsnorth in Kent, and Owston Ferry in South Yorkshire. However, these are still considered "risky" by critics due to the uncertainty surrounding the cost.

The UK government will need to decide whether to allow EDF to proceed with the project, despite the fact that it will cost nearly £500 billion. Although the company is currently a French utility, it has conducted extensive preparatory work in the UK. It balked at the existing financing system, which requires the developer to take on all the risks and costs of such a costly project. The government said that if the project was approved, construction would begin before the next general election in 2024.