How to Select a Climate Change Thesis Topic 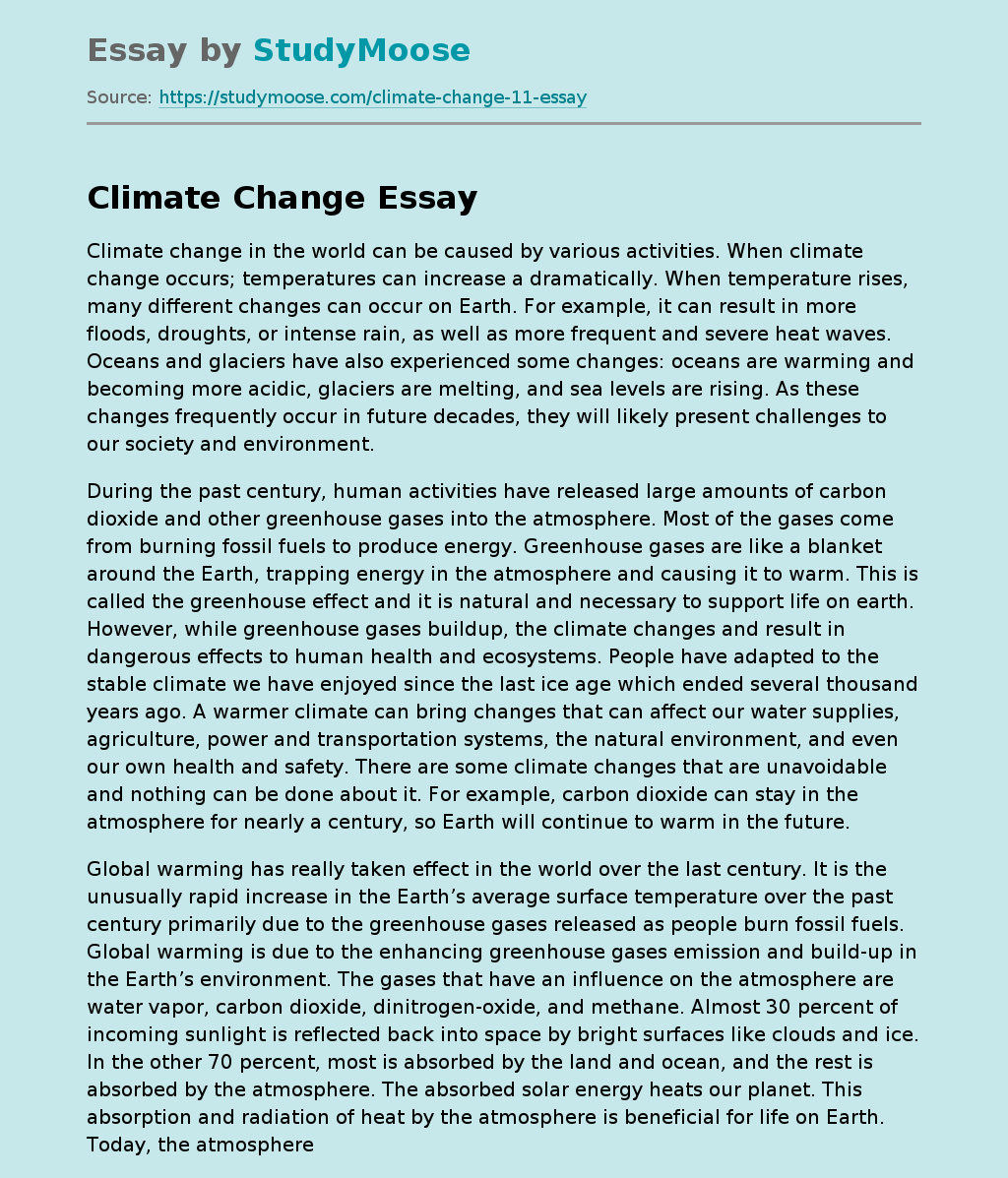 Selecting a climate change thesis topic can be a difficult process, but the steps outlined below can make it much easier. Conduct simple background research to learn more about climate change and choose a topic area that interests you. Read widely and gain insights on possible topics. Brainstorm your ideas to come up with the best one. Once you have a list of possible topics, start to conduct your research. Make sure you research the topic thoroughly to ensure it is relevant to your thesis.

Impacts of climate change on the environment

The effects of climate change are already in progress, impacting all of us. Prolonged periods of high temperatures increase wildfire risk and extend fire seasons. Rising sea levels affect coastal areas and increase the risk of storm surges and erosion. Water resources in the Great Lakes region are already under stress, and climate change will exacerbate a variety of environmental risks. Some areas have already seen their agricultural production significantly reduced because of the effects of climate change, including drought and flooding. In Alaska, sea level rise is threatening coastal communities with displacement.

There is no one list of impacts from climate change, but they are becoming more pronounced. The world's temperature has already risen about 1degC above pre-industrial levels, and it will only continue to rise. Extreme heatwaves will probably become more common, extreme precipitation events will intensify, and sea levels will continue to rise. Extreme heat is likely to worsen over the coming decades and will significantly affect human life.

Another impact of climate change will be on biodiversity. Many species of animal and plant life depend on a certain range of climate parameters to thrive. If those parameters change, these species will likely have to move or adapt to new environments, which reduces biodiversity and the resilience of the ecosystem. Humans may be able to manage some of these changes, but the main challenge is preventing pollution at the source. Changing weather patterns will impact agricultural production, which may affect the use of fertilisers.

Poorer communities of colour are disproportionately affected by climate change. They are more likely to be confined to jobs that rely on natural resources, and they face numerous barriers to accessing technical and financial resources. Women also face less protection and adaptation mechanisms, making them more susceptible to climate-related disasters. And once they're hit, they'll be harder to recover. It's clear that climate change has far more negative impacts than it has benefits.

Human health and well-being are also affected by climate change. In the US, extreme weather events like wildfires and floods affect people in many ways. Typhoon Haiyan in the Philippines killed at least 6,300 people in 2013. Heat stress is another problem that affects people's lives. The 2003 summer heat wave in Europe killed over three million people. A number of other areas are already suffering from water quality degradation caused by rising temperatures.

Impacts of climate change on biodiversity

Recent studies have identified a variety of ways to assess the impacts of climate change on biodiversity. While the number of species "committed" to extinction is the most commonly used indicator, it may be misleading as the actual loss of species may be greater than what is currently predicted. Another indicator of biodiversity loss is the change in the Mean Species Abundance. Both are based on the latest available science, but there are important differences between them.

Rapid climate change is particularly detrimental for species that have small populations or restricted climatic envelopes. In Australia, for example, 25% of eucalypt species live in areas with minimal annual temperature variation. Even a small increase in the average temperature can cause a shift in the climatic envelope for species. Modelling suggests that by 2070, most species will experience novel climatic conditions. This means that species will face new threats in addition to climate-related declines.

In addition to triggering a response to the changing temperature and precipitation, climate change can also modify the web of interactions within a community. Some species may be able to survive with a new climate but their response can indirectly impact other species that depend on them. In one study of 9,650 interspecific systems, a shift was predicted for up to 63% of terrestrial ecosystems. This includes cool conifer forests, boreal forests, scrublands, and savannahs. The shifts may be irreversible, as a "tipping point" may occur that halts biodiversity changes.

While the effects of climate change on biodiversity are not yet clear, the study results feed into the ongoing debate about global temperatures. The Paris Agreement set a limit of 2 degC and some researchers have projected negative impacts to species. They have also found that species will suffer losses in their habitats. These studies support the fact that the loss of habitats is one of the biggest threats facing biodiversity. This is the reason why the authors of the paper suggest that the goal of limiting global temperatures to 2 degC may have a more positive effect than originally believed.

Even though climate change has had a modest impact on ecosystems, the loss of biodiversity is rising. The global estimates of biodiversity loss are considerably higher than the rates in the fossil record. Nevertheless, a thriving ecosystem will help offset the negative effects of climate change. So, what should be done to protect the biodiversity? And where should we start? Let's begin with the question of how to make our ecosystems more resilient to it.

Impacts of climate change on migration

There are many issues that migrants have to deal with, including extreme heat, food insecurity, and exposure to harmful pathogens and insects. Climate change will add even more challenges. Migrants often lack the resources and tools necessary to mitigate their exposure to the harmful effects of climate change. Furthermore, migrant communities are often living in substandard housing without window screens or proper ventilation. Additionally, climate change will increase the number of mosquitoes, making it difficult for migrants to protect themselves from the heat.

In addition to climate change, economic conditions and governance play a significant role in migration. Although migration is a last resort, it is often the only alternative to facing threats and poverty. Therefore, the more wealthy parts of the world are more able to withstand the warming of the earth. Climate change will also affect migration patterns as people are forced to leave their homes. As a result, fewer migrants will seek new opportunities in a place with improved resources.

The impacts of climate change on migration are far-reaching. The emergence of new toxins and diseases that cause severe illnesses, droughts, and droughts has affected migration patterns. As the effects of global warming spread to the low-income countries, many individuals are being forced to relocate. As a result, climate change is affecting the economy of low-income communities. Those in low-income groups cannot afford to build better homes, and disaster preparedness is lacking. In addition, women, children, and the elderly are more vulnerable to climate change than men, and the poorest countries are more likely to be in places with poor infrastructure and services.

A recent report published by the United Nations Intergovernmental Panel on Climate Change highlights how climate change will affect migration. According to the report, between 31 and 72 million people may be displaced in the near future due to increased sea levels, drought, and other effects of global warming. These factors make migration both easier and more difficult in some countries. For example, increased rainfall is linked to reduced rural-to-urban migration in Kenya and Zambia, while drought has decreased migration plans in Ghana.

Impacts of climate change on tourism

Many of the countries that are most vulnerable to climate change are also tourist hotspots. During Covid-19, tourism nearly came to a halt, while carbon emissions dropped and wildlife flourished. Despite the economic losses incurred by the global tourism industry, the effects of climate change exacerbated the humanitarian crisis in some countries and increased the threat of poaching and illegal logging. These factors also affected the comparative attractiveness of various tourist destinations.

While climate change may alter the weather for tourism and recreational activities, consumers are more resilient and can adapt to the challenges of changing weather conditions. Consumers also have the option of changing their travel plans quickly, if necessary. Moreover, consumers can adapt to changes in climate by changing destinations. However, it is still unclear how climate change will affect specific activities. For instance, rising temperatures may make Indiana more attractive to tourists. However, this is still a preliminary analysis.

The researchers used a mathematical model to predict how the flow of tourism would change under various conditions, including climate change. They input several factors that affect tourism, including population growth, climate, economy, and temperature. They then plug in estimates of a 3 degree Celsius increase by 2100, or about five degrees Fahrenheit. This gives a good idea of how tourism might be affected by climate change. The researchers hope that more people will adopt more eco-friendly travel habits.

While there is a conflicting relationship between climate change and tourism, the effects of a changing climate on tourism are multifaceted and will require the involvement of all sectors of the industry. The study hopes to provide useful guidelines to tourism professionals and tourists alike. It is a critical area for further research. There are many potential benefits of climate change for the tourism industry. So, if you're considering traveling abroad, be sure to make sure that you are ready for it.

The impact of climate change on tourism has already begun to take shape. Research indicates that the tourism industry contributes 5% of global greenhouse gas emissions. Of this, 50% of the CO2 that is emitted comes from air travel, while the rest comes from hotels and lodging and automobiles. Different tourism sectors are adopting various mitigation measures to mitigate the impact of climate change on their industry. For example, aviation is now prioritizing measures that help reduce CO2 emissions and hotels and restaurants have implemented water-saving practices.