Hinkley Point B Extended by 7 Years 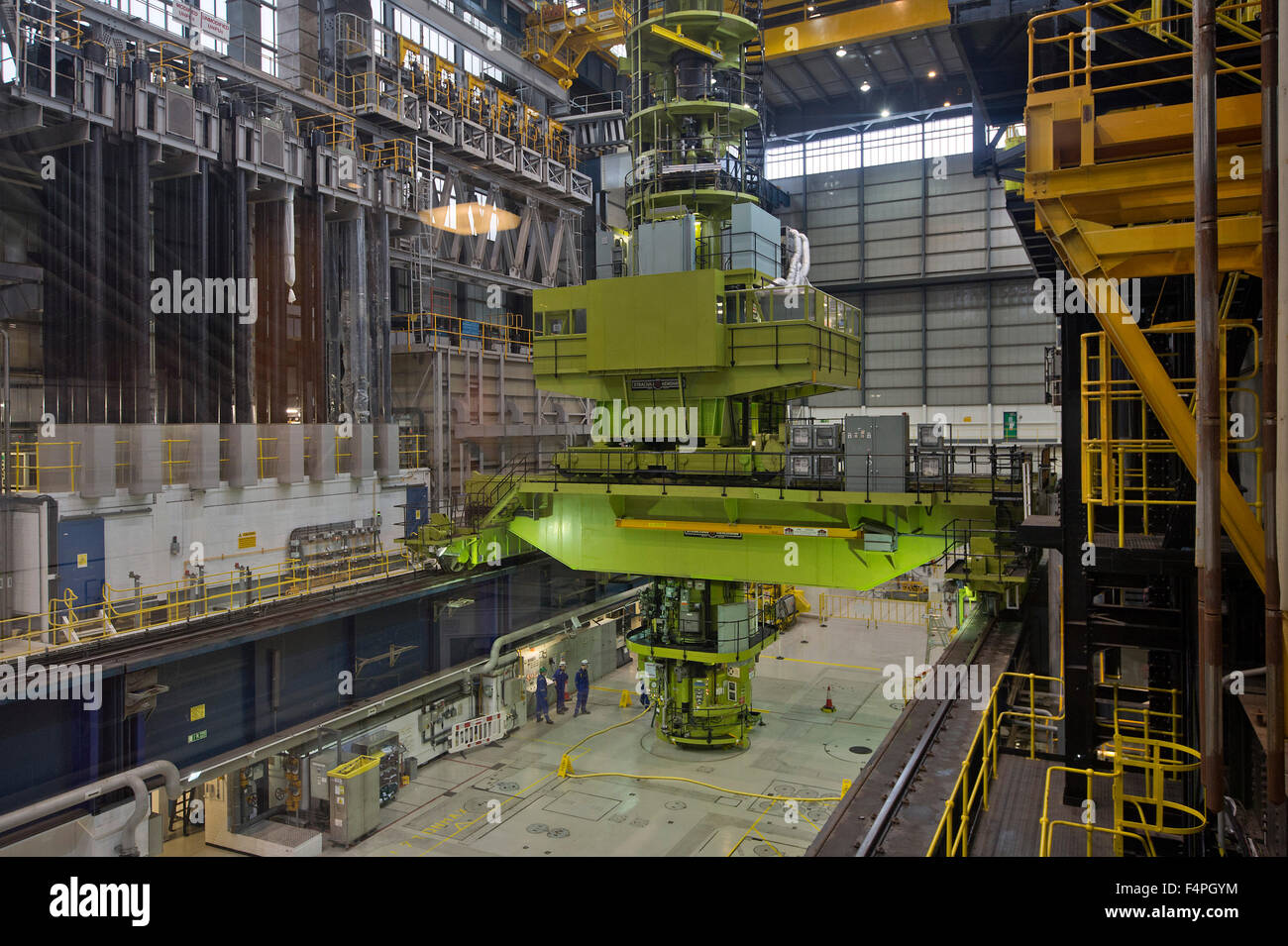 The estimated generating life of Hinkley Point B nuclear power station has been extended by seven years, from 2016 to March 2023. The aging issues at Hinkley Point B were identified by EDF in June, when it suspended power generation at the station for graphite inspections and maintenance. The company will soon submit a safety case for restarting the plant to the Office for Nuclear Regulation. EDF has yet to decide if it will de-fuel the plant, but the company says it is committed to maintaining the safety of the community.

EDF has announced the postponement of the scheduled end of the graphite core inspections at Hinkley. The power station is approaching the end of its lifetime and is due to stop generating electricity in March 2023. Graphite bricks in the reactor core are vulnerable to cracks. Cracks in these bricks are below the tolerance limit, but they do require inspection.

Graphite is particularly difficult to image with ultrasound, and brick geometry and grain structure make it difficult. Additionally, the presence of methane holes increases the amount of back-echoes. Therefore, precise angles and frequencies are required for ultrasonic inspection. Despite the difficulties of graphite core inspections, electrical and mechanical inspection methods are still in development. Eventually, new inspection methods will be available to meet the needs of future nuclear power stations.

Engineers at the Hinkley Point B nuclear power station use an IMAPS system. This system is used to assess every refuelling event. The system is updated every four hours and contains information about 2549 refuelling events. The data feeds into the relevant Monitoring Assessment Panel meeting. The IMAPS system also allows engineers to view the history of fuel channels. The system displays principal data instantly, which is linked to more detailed information in a document management system. The system also assists engineers in selecting which fuel channels should be inspected during an outage.

Despite the risk of graphite core cracks, the results of the inspections have been "well within expectations." In addition to performing comprehensive assessments of graphite in nuclear reactors, the company has also invested USD4 million to improve the plant. It has been a thorny issue for the public, but EDF has remained committed to improving safety at the Hinkley Point B nuclear power station.

The French energy giant EDF has ruled out extending the generating lifetime of Hinkley Point B nuclear power station. The UK government's culture minister, Chris Philp, has said an extension is a sensible precaution. Hinkley Point B is scheduled to close this summer, but the government is weighing the options to keep the nuclear power station running into the future. This article explores the implications of an extension.

The estimated generating life of Hinkley Point B is a decade and a half, but its decommissioning is scheduled to take a further seven years. During that time, it has prevented the release of millions of tonnes of carbon dioxide into the atmosphere and created thousands of jobs. The nuclear power station will cease to generate power in March 2023, over 15 years ahead of schedule.

The UK government has approved the Hinkley Point C project, but a major problem has arisen due to the governmental share of funding for major infrastructure projects. The new coalition government had to agree on a new policy in order for the new plant to proceed. After that, they introduced reforms to accelerate the construction process. In November 2020, the government committed to "deliver new and advanced nuclear power" as a top priority. They also committed to reach an investment decision on "at least one" large-scale nuclear power station by the end of parliament, in December 2024.

Hinkley Point C is expected to cost PS13-15 billion. Horizon Nuclear Power Wylfa Ltd applied for a site licence for the project in April 2017, and it is estimated to take up to 19 months. Hitachi has announced that it will suspend the project if it fails to secure an investment partner. However, the UK government expects the strike price for Wylfa Newydd to be lower than that of Hinkley Point.

EDF's revised cost estimates for the project have pushed back the expected start of unit 1 to 2027. The company expects to have around PS30 billion of debt upon completion of the project. However, the cost of the Hinkley Point C nuclear project has risen PS3 billion since the initial estimate in May 2016.

The cost of defuelling Hinkley Point B is not yet known. The plant will be transferred to Magnox, a subsidiary of the Nuclear Decommissioning Authority, when its fuel is depleted. The defuelling of the power station was extended by seven years by the energy company EDF, but the project will still be costly. EDF is already under pressure to get its cost under control to avoid having to raise it again.

The UK government's decision to build Hinkley Point B was a crucial piece of the puzzle. Back then, few people expected the U.K. to become a world leader in low-emissions power generation. But the plant is helping the UK avoid releasing millions of tons of carbon dioxide and has created thousands of jobs, as well as providing a reliable supply chain. While the costs are now rising, the government has not backed down.

While EDF has refused to extend the life of Hinkley Point B, he has said that the cost will not rise by that much. EDF said in a memo that it was technically possible to extend the operation of the plant for an additional six months. EDF has previously denied requests for an extension of the defuelling deadline. Nevertheless, the UK government is weighing the costs and benefits of extending the life of the Hinkley Point B nuclear power station.

As the UK has made some changes to its plans in response to the concerns of the European commission, the UK government is still facing a battle to publish the documents it needs to make the decision. In the meantime, the EU is continuing to fight the project until it has a final outcome. There will also be more questions than answers when it comes to how the UK government calculates the strike price.

While decommissioning is costly, the process is incredibly crucial to EDF's future. The company expects to shut down the Hinkley Point B station sometime around mid-2020, when it was scheduled to stop generating power. Its defuelling process requires a large number of workers, specialist supply chain companies, and a huge amount of money. It is the most expensive part of the decommissioning process.

The Scottish government and other opponents of the closure of Hinkley Point B are calling for a postponement of the closing date, but the UK government is refusing to do so. Its decision would see the nuclear power station permanently shut down, importing gas from volatile global markets, increasing consumer bills and putting the UK's energy security at risk. But the Scottish government is still standing by its position.

Opposition to closure of Hinkley Point-B is growing, and many politicians have spoken up against it. The government wants to ensure that the station is kept open as long as possible to avoid a more expensive gas transition. However, it must be remembered that the operation of a nuclear power station is not necessarily profitable. Its fixed costs make it difficult to make a profit, and electricity prices have become increasingly volatile in the GB market. This volatility means that nuclear plants that can react quickly to changes in market conditions would be the ones to survive.

The government needs to re-examine its financing options. The government could use the contracts for difference scheme, which allows developers to fund the project, and only pays once the station has started generating electricity. This model could be the most affordable way to finance the project. It would also ensure that Hinkley's employees are retained in the area. Ultimately, it's up to the Government to decide.

A key issue for opposition is the issue of private investment. While the UK government may not be keen to support Hinkley Point C, the French government wants to see the project succeed, and is hoping to demonstrate the European Pressurised Reactor (EPR) technology. But this new reactor has a history of failing to meet schedules, and both EDF and the Chinese have stated that it has been unable to secure the funding for its project.

The cost of operating a new nuclear power station is a major concern, and the French Government has repeatedly warned against allowing a new one in the county. However, EDF and Bradwell have urged the UK government to give the Chinese company a guarantee of a successful project. And if the French government grants the funding, this could help EDF secure the necessary capital to maintain its existing fleet of reactors.