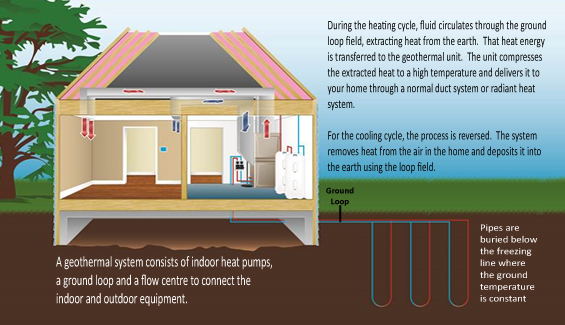 There are several factors that you should consider when deciding which heating and cooling system to install for your home. These factors include cost, life span, reliability, and energy efficiency. If you have a small unit or single bedroom apartment, geothermal heating and cooling will likely be ineffective in lowering your energy bills. However, it is possible to save money by choosing this option for a larger home.

Purchasing a geothermal heat pump can be a smart investment for homeowners who want to reduce their carbon footprint while simultaneously improving their comfort and energy efficiency. The federal government currently offers a tax credit that could make installing a geothermal system comparable to purchasing a traditional furnace. This credit is available on new homes, as well as existing homes.

When considering installing a geothermal system, you must first determine the type of installation you need. This will depend on the type of construction and the surface soil in your home. In addition, the type of groundwater available in your area may affect which system is best for your needs. The most common systems are closed loop systems, while the open loop type is less common and may be only appropriate for certain climates.

A geothermal heat pump installation costs between $12,000 and $30,000 for most homes. About half of the cost is for installation, while the rest is for the system and supplies. Most geothermal heat pumps are installed by licensed installers hired through local utility companies. Their hourly labor rates can range from $50 to $100 depending on experience and the size of the home. The installation time varies from four to five hours for smaller units to seven hours for large systems.

Geothermal HVAC systems also require permits from DNR/DEQ and electrical authorities. Additionally, a comprehensive environmental impact study is required, which can add anywhere from $750-$1,500 to the overall cost of the project.

Geothermal heat pumps can reduce a home's carbon footprint by as much as 42% per year. They also use less power to operate and transfer heat, putting less strain on the power grid. These systems are now available in every state in the U.S., and an analysis by the Department of Energy suggests that they could be installed in 28 million homes by 2050 if aggressive deployment is continued.

To compare the energy efficiency of a geothermal heat pump, look for its SEER rating. The higher the number, the more efficient the system. The EER is the ratio of heat removed from a home to the energy needed to cool it. In general, a geothermal system has an EER of 13 to 18, which is significantly higher than most conventional systems.

A geothermal system works on similar principles to an air-source heat pump, except that the geothermal system uses a liquid heat transfer medium. This liquid solution is easy to heat and can transfer a significant amount of heat. The heat is then transferred into an indoor unit that contains a heat exchanger and air handling system. The air handler blows heated air over the heat exchanger, which heats it before going through the home's ductwork.

A geothermal system is also much more affordable. A geothermal heat pump uses renewable solar energy rather than fossil fuels, which makes it the more economical option. And since it can operate for longer periods at lower speeds, it is also more efficient, resulting in consistent comfort throughout the year. Government agencies have endorsed this system as the best choice.

When choosing between geothermal and heat pump systems, a homeowner will want to consider the cost as well as the longevity of the heating and cooling system. While geothermal heating and cooling systems are extremely cost-efficient, they are not suitable for every property. They require a high initial investment and may not be the most eco-friendly choice for some properties. Another option is solar power, which is also cost-effective and environment-friendly.

A geothermal heat pump system draws energy from the ground or from water. Ground sources typically maintain a higher temperature than air, and water is a natural resource that can be easily accessed. Geothermal heat pumps use approximately 25% less electricity than conventional systems, and they also require less space.

A geothermal heat pump's lifespan is greatly affected by the type of water that it receives. For example, hard water can shorten the life of the system. It can cause problems with the system's pipes due to the minerals it contains from the soil. This problem occurs in open-loop systems, but it can also occur in lake-based systems. Water containing minerals, such as iron, copper, manganese, and calcium, can also cause problems with the system. Water softeners can also contaminate underground sources, reducing the lifespan of geothermal heat pumps.

Geothermal systems are ideal for domestic homes as well as for larger buildings. These energy efficient systems can significantly reduce heating and cooling bills, and can pay for themselves in as little as five to ten years. However, it is important to note that geothermal systems are not suitable for all locations. For example, homes on the west coast are more likely to get better results than those in the southeast or Midwest.

A major benefit of geothermal heating systems is their reduced environmental footprint. While these systems require more electricity than heat pumps, they are capable of running on alternative energy sources like wind and solar energy. In addition, geothermal systems can be tailored to different locations because they are modular, allowing them to be attached to just about anything.

Another benefit of a geothermal system is reliability. Most models last between 20 and 50 years. This is significantly longer than the average lifespan of an air-source heat pump, and it is possible to get up to 200 years from an installation. Additionally, geothermal heat pumps require very little maintenance, unlike air-source heat pumps. However, open-loop water-source systems may require additional maintenance due to mineral buildup.

The cost and reliability of geothermal systems depend on your needs. A geothermal system can provide heating and cooling without losing efficiency during extreme weather conditions. It also requires less electricity than an air-source heat pump.

Installation of a geothermal system can be costly, however, because it requires extensive excavation and ductwork modifications. Compared to a traditional HVAC system, a geothermal system can pay for itself in four to eight years. Depending on your local utility rates and the efficiency of your system, it may even pay for itself over a much longer period of time. However, you should always contact a professional installer to get an accurate estimate.

Geothermal heat pumps are more efficient than conventional heating systems because they don't use fuel to create warmth. They use the heat from the ground to distribute it throughout your home through a duct system. In addition to heating and cooling, they can provide hot water for you as well. Geothermal heat pumps are also cheaper than conventional systems, and you can enjoy consistent indoor comfort.