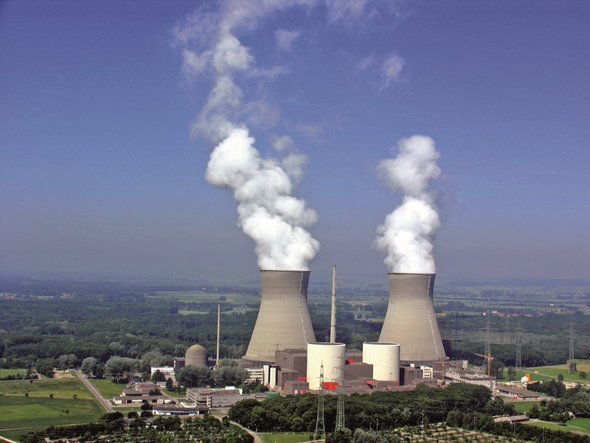 The Dresden nuclear power plant was constructed as part of the Atomic Energy Act of 1954, which allowed private companies to operate and maintain a nuclear facility. In 1955, Commonwealth Edison contracted with GE to build Unit 1 for $45M. One third of the contract price was shared between the company and the Nuclear Power Group Inc. The plant was built with the help of the BWR from GE's Vallecitos Nuclear Center and the BORAX experiment of the Atomic Energy Commission.

While the Byron Generating Station is licensed for another decade of operation, the Dresden plant is not yet licensed for another 20. Both plants employ nearly 1,500 workers, with additional supplemental workers hired during refueling outages, largely from local union halls. They generate $63 million in state taxes annually and support local schools. They also provide about 30 percent of Illinois' carbon-free energy, making them essential to Illinois' goal of 100 percent clean energy.

The Byron Generating Station and Dresden nuclear power plants are currently on the line for shutdown, and Exelon says that only an Illinois General Assembly vote could save them. But legislators still have until the end of the month to make their decision. The plant will close in November, if Exelon does not find a new source of electricity by then. The plant will lose some jobs, and Illinois will be left with a shortage of electricity for the next several years.

Byron is one of Illinois' only nuclear power plants. It has two units and is capable of producing about 2,500 net megawatts of electricity, or about enough to power two million average homes. The plant also has cooling towers that overlook the Rock River Valley. The Westinghouse pressurized water reactors are a key part of Byron's operation. The facility began commercial operation on Aug. 2, 1987.

Despite being decades old, the Byron and Dresden nuclear power plants have yet to close. However, Exelon has filed decommissioning plans with federal regulators. If the bill passes, both plants would close by September and November 2020, respectively. While Exelon is not saying whether the bill will save the two plants, it's merely trying to make the industry more sustainable.

The Dresden Generating Station nuclear power plant is located in the northern Illinois town of Dresden. The company Exelon acquired the facility in 2000 when it merged with Unicom-owned Commonwealth Edison. The plant is operated by a unionized workforce. Its two units, Unit 2 and Unit 3, generate electricity for approximately a million homes in northern Illinois. A refuelling outage will take place during the refuelling outage, during which the reactor vessels will be overhauled and upgraded.

In April 2015, a report by Monitoring Analytics, a non-profit research group, found that the two plants were financially viable despite their high costs. The report was based on projections of power prices and operating costs, which were taken from average nuclear industry cost data and forward electricity market contracts. Its findings, based on data from both Dresden and Byron, show that the nuclear power plants are profitable and are unlikely to close.

The Dresden Generating Station was the nation's first privately funded nuclear power plant. It has three units: Unit 2 and Unit 3 are still in operation and are expected to shut down in 2023. While Unit 1 is retired, the other two are scheduled to close in 2031. The company has a decommissioning plan approved by the Federal Energy Regulatory Commission. The shutdown of Unit 3 is dependent on the decommissioning plan.

Although Exelon has 21 reactors at 12 sites nationwide, most of them are in Illinois. Despite this, the company is still profitable. Exelon says its nuclear power stations in Illinois are at risk of being prematurely shut down. These stations employ more than 1,500 people. The company says premature retirement of all four plants would raise Illinois' electric sector emissions by 70 percent. Despite these negative economics, the company says the shutdown will help it meet its goal of reducing greenhouse gas emissions by 85 percent by 2025.

The Dresden nuclear power plant, formerly known as Dresden 1, was shut down in 1978. The two remaining units, LaSalle and Bremen, have been licensed to operate for another 20 years and a decade, respectively. They are responsible for about 30 percent of Illinois' carbon-free energy, and are a critical part of the state's 100 percent clean energy goal. These plants also support local schools and employ more than 1,500 people.

The two plants face revenue shortfalls of hundreds of millions of dollars each because energy prices are dropping. Despite broad public support for the expansion of clean energy resources, the recently-passed FERC ruling undermines longstanding state policies promoting the development of renewable energy. It gives fossil-fuel plants an additional competitive edge over nuclear power. In other words, Exelon's plants are not profitable enough to survive.

The cost of operating a nuclear power plant is often higher than its capacity value in the market. The company's modeled costs are $20/MWh to $21/MWh. Meanwhile, a day-ahead power price at the PJM Northern Illinois hub is around $19/MWh. This is a significant amount of money for nuclear plants. This is a key reason why Exelon is struggling financially, and how that's affecting power prices.

Exelon Generation, the company that owns the Dresden and Byron nuclear plants, is looking to retire them. They have been in operation for decades and will shut down in September and November, respectively. Exelon Generation has stated that it hopes that federal legislation will pass soon so that these nuclear plants can become completely clean. The company has already filed decommissioning plans for the Byron and Dresden nuclear plants.

Exelon Generation, which operates Dresden and Bremen nuclear power stations, will become a wholly owned subsidiary of EEG. The new entity will have a unified corporate name and be publicly traded. The shares will be held by current shareholders of both companies, Exelon and PSEG. Senior executives responsible for the stations will not change. In addition to the combined company, Exelon Generation, which will operate the Dresden nuclear power station, will continue to maintain the licenses and permits for the Dresden nuclear power plant.

The number one nuclear generating unit at Braidwood Generating Station, or BGS, was ranked 12th worldwide in August 2006 and first in the United States in output. In the calculations, gross output is based on electricity generated by the plant and is approximately 5 percent higher than net output. The NRC's web site has more information on tritium. The federal government is considering expanding climate provisions in a bipartisan infrastructure law.

Exelon Generation, the company that operates Dresden, Byron and the LaSalle County nuclear power plants, has applied for license amendments at the U.S. Nuclear Regulatory Commission. The proposed amendments would update the emergency response organization positions at the Dresden plant and the Byron Generating Station. In its quarterly financial report, Exelon says the deal will cost an average customer about 80 cents per month.

While Nuclear plants aren't profitable in general, the Union of Concerned Scientists published a report detailing the profitability of U.S. nuclear power plants in 2009. The report included hundreds of pages of data, which caught the attention of Illinois senate president, Bill Harmon, who threatened to write legislation to force Exelon to sell the plants. The report found that both Byron and Dresden were profitable. Exelon had previously claimed that the plants were not profitable, but that low natural gas prices made them ineligible for retirement.

Currently, two units at the Dresden Generating Station, a 1,800-MW plant in Morris, Illinois, will shut down at the end of 2021. The two remaining units have been in operation since 1970 and 1971. The company is preparing to send out notifications of job cuts, while state lawmakers are continuing to work on legislation to keep the plants operating. The company is reportedly in need of around $1 billion in decommissioning and restarting costs.